I’ve currently got aprons in my mind a lot. I’m working on an exhibition of aprons for Unit Twelve later this year which we are hoping to tour to other galleries. I’m co-curating and also making at least one new narrative apron for the show. Or at least I *will* be making one, I’ve not actually done it yet!
In the meantime, I thought I would share an apron I made years ago. Inspired by Jenny Doh’s Art of the Dress challenge, I have photographed myself wearing the purple pockets apron as an overskirt as I love to do. 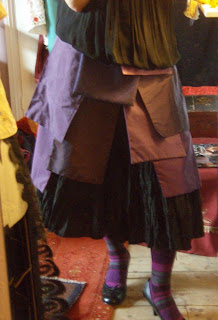 I designed this way back in 2005 and first made it in white cotton organdie which is utterly impossible to photograph. This version came about in 2007 and always gets lots of comments (mostly positive!) when I wear it. But it doesn’t photograph well on a hanger… better on me, messy (but matching colour) bedroom included. The deadline to join in with Art of The Dress Apron challenge is 1st March, so quick – photograph yourself, blog it and add to Jenny’s post. I would *love* to see someone wearing an apron from one of my patterns, there’s a few out there…

This one from Sew it Up

There’s one in Sew Eco made from a restyled skirt.

There was sort of one in Pretty Little Patchwork but the pattern never made it in. It is a real shame because it is a fabulous apron. Maybe it is time I issued the pattern myself.

This one is in A is for Apron and Lark’s new booklet of apron designs.

There’s one in Making Stuff.  You can even see the project page on the amazon large image links, but it isn’t inspiring (terrible photo…). The apron is nice though.

(although this detail shows the rather wonky stitching, how embarrassing… I’ve improved in 5 years, that’s all I’ll say!)