Three years. Three years I’ve been in this studio. [And the same house. That’s more than twice as long as I’ve lived anywhere in the last 16 years.]
But the studio – really this is my second studio, but the first was only a 6-month sublet so I never really got to fill it to the ceiling with fabric and sewing machines and fluff of all kinds. I didn’t quite expect to be here 3+ years [life tends to be like that] so I didn’t do a lot of work when I moved in, save for some vital extra shelves.

But just lately I have been a tad less busy and my mind has turned to the mess that is my studio. It’s almost a kind of procrastination. Having had a real job for most of this year, I’ve not actually made much at all. Which is awful and I am remedying it forthwith, do no fear. But I have got a bit of creative drought. Or an impetus shortage. Or something. But with me, a little sorting out, shuffling fabrics around, making new workspaces where there was mess, really helps my creativity. So I am sorting. A kind of Autumn-cleaning. Hibernation nesting maybe? I fully intend to spend winter buried in fabric in my studio!
So anyway, the shelves. About a year ago I had a major shelf collapse – the rubbish wobbly shelves that were there when I moved in. I’ve put up a lot of shelves in my time and believe me, I can put up solid shelves. I come from a family of book owners. Serious book owners. And because of this shelf-training, I have only ever had one collapse. And that wasn’t my fault. Stupid crumbly walls.

In contrast the studio has incredibly solid walls that are sooooooo hard that even my entire weight behind the hammer drill is not always quite enough to get the screw holes deep enough. Which is presumably why the previous tenant left shelves that were kind of stuck on the wall with paint and willpower.

So off the came, taking a fair chunk of the wall with them.
They certainly weren’t designed to take this.

I dread to think of the weight of fabric I have. The two guys who loaded the van when i moved might hazard a guess at about 15 gazillion tonnes. This is only the stuff on the inherited shelves – the newer shelves I put up a couple of years ago are still fully dressed in their array of textiley goodness.

Look. All tidy. It’s like that all the time, you know. Really.

So anyway, much drilling and swearing later I got the shelves up on the right hand side of that wall and with much less swearing I got the left hand side up. I’ve no idea why the second lot was easier, but it was. Phew.

So here they are. Looking oh so stylish huh, with the old holes and unpainted bits where the brackets came off. Never mind. Soon covered with fabric. 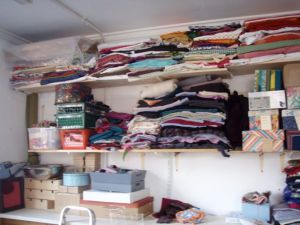 That was taken on Saturday and things have since been re-arranged again. A lot more sorting needs to be done, but it’s a whole lot easier to sort when you have somewhere to put it.

I’m now planning an ENTIRE redesign of my whole studio (except this wall of course) to make the place more useable and efficient. I haven’t done it before because I didn’t think I was going to stay. But I am. Try getting me out of there now. Not a good plan.

So yeah, I’ve written a blog about putting up shelves. I will do some sewing again. Soon. Honest.

2 thoughts on “Shelving the studio”